I’d like to thank all the Kubuntu members who just voted to re-affirm me on the Kubuntu Council.

Scott Kitterman’s blog post has a juicy details of the unprecedented and astonishing move by the Ubuntu Community Council asking me to step down as Kubuntu leader.  I’ve never claimed to be a leader and never used or been given any such title so it’s a strange request without foundation and without following the normal channels documented of consultation or Code of Conduct reference.

I hope and expect Kubuntu will continue and plan to keep working on the 15.10 release along with the rest of the community who I love dearly.

Last week I had the pleasure of speaking at Protocols Plugfest Europe 2015.  It was really good to get out of the bubble of free software desktops where the community love makes it tempting to think we’re the most important thing in the world and experience the wider industry where of course we are only a small player.

This conferences, and its namesakes in the US, are sponsored by Microsoft among others and there’s obviously a decent amount of money in it, the venue is a professional conference venue and there’s a team of people making sure small but important details are taken care of like printed signposts to the venue.

What’s it all About?

In 2008 Microsoft lost an EU antitrust case because they had abused their monopoly position in operating systems.  This required them to document their file formats such as MS Office and protocols such as SMB.  This conference is part of that EU requirement meaning they have to work with anyone who wants to use their formats and protocols.  They have a website where you can file a request for information on any of their documents and protocols and everyone said they were very responsive in assigning engineers getting answers.

Since 2008 Microsoft have lost a lot of ground in new areas in the industry such as mobile and cloud.  Because they’re not the dominant player here they realise they have to use formats and protocols others can use too otherwise they lock themselves out.

I went to talks by people working on Samba, LibreOffice and Kolab which all gave pleasing insight into how these project work and what they have to do to workaround complex proprietary protocols and formats.  LibreOffice explained how they work with OpenDocument, they add feature and for any feature added they submit a request for it to be added to the standard.  It’s a realistic best practice alternative.

I went to a bunch of Microsoft talks too about changes in their file formats, protocols and use of their cloud service Azure.

It was great meeting some people from the free software and MS worlds at the conference.  I spoke to Christopher about how he had been hired to document SMB for MS, to Dan about taking over the world, to Miklos about LibreOffice and many others.  On the MS side I spoke to Tom about file formats, Darryl about working with Linux, to Jingyu about developing in MS.

I hope I won’t offend anyone to say that there’s a notable culture difference between the open source and the MS sides.  Open Source people really do dress scruffy and act socially awkward.  MS people reminded me of the bosses in Walter Mitty, strong handshakes, strong smiles and neat dress.

One part of the culture that depressingly wasn’t difference was the gender ratio, there was only half a dozen women there and half of those were organising staff.

The Microsoft people seemed pretty pleased at how they were open and documented their protocols and formats, but it never occurred to them to use existing standards.  When I asked why they invented OOXML instread of using OpenDocument I was told it was “MS Office’s standard”.  When I asked if Skype protocols were open they seemed not to know.  It probably doesn’t come under the EU court requirements so it doesn’t interest them, but then all their talk of openness is for nothing.  When I suggested Skype should talk XMPP so we can use it with Telepathy I was given largely blank faces in return.

Talking to Samba people and OpenChange people about my opinion that their products should be stop gaps until a better open protocol can be used was met with the reasonable argument that in many cases there are no better open protocols.  Which is a shame.

I went into the MS testing lab to test some basic file sharing with Samba and reminded myself about the problems in Kubuntu and discovered some problems in Windows.  They had to turn off firewalls and twiddle permissions just to be able to share files, which was something I always thought Windows was very good at.  Even then it only worked with IP address and not browsing.  They had no idea why but the Samba dudes knew straight away that name browsing had been disabled a while ago and a DNS server was needed for that.  Interesting the MS interoperability staff aren’t great at their own protocols.

I had a great time in Zaragoza, only spoiled by travellers flu on the last day meaning I couldn’t go to the closing drinks.  It’s on the site of a 2008 world fair expo which feels like one of those legacy projects that get left to rot, 2008 wasn’t a great year to be trying to initiate legacy I think.  But the tapas was special and the vermut sweet.  The conference timetable was genius, first day starts at 9:00 next at 10:00 and final at 11:00.  The Zentyal staff who organised it was very friendly and they are doing incredible stuff reimplementing exchange.  It’s lovely to see MS want to talk to all of us but they’ve a way to go yet before they learn that interoperability should be about an even playing field not only on their terms. 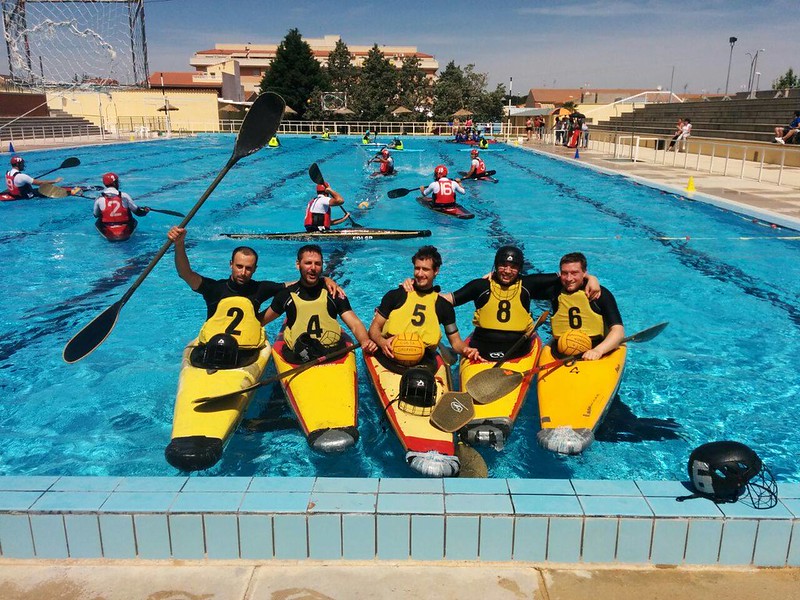 Last weekend I played my first match of polo in Spain.  We won a game, and draw a couple more which got us into the second round where we lost wonderfully.  I really enjoyed it.  It was run a little differently from the matches in Scotland, the obvious difference being it was outside in the sun which I fear would be difficult to recreate in Scotland. Here’s a list of other differences I noticed incase any are useful:

Ubuntu Online Summit is starting today and Kubuntu have shuffled about their timezones in an attempt to fit in.  Tomorrow we have two sessions, at 18:00UTC we have the Plasma 5 demo showing the lovely new desktop we are using.  An hour later at 19:00UTC we have Kubuntu Kickoff to discuss the To Do items for the next cycle.  You can join in on the IRC channel and at some point we’ll work out how to invite people to the Google hangout.

Every community needs a way to discuss itself but until recently the Ubuntu community has lacked one, especially after the end of Ubuntu Developer Summit meetings.  The ubuntu-community-team list was set up to provide that and I encourage all Ubuntu members to join it.  Currently there’s a heated discussion about an incompatibility in Canonical’s IP policy with the Ubuntu promise, you don’t want to miss it.

My postal vote has been sent off for the UK general election which is on Thursday.

The UK parliament and the government it forms is up for election.

What happened to independence?

In the last week of the referendum on Scottish independence last year the UK government threw everything it could think of.  Scare stories were all around about how it would destroy the economy, the English would keep our shared currency, the banks would move out of Scotland and the supermarkets would raise prices.  A back bench opposition MP called Gordon Brown gave a Vow about giving more powers to Scotland.

The day after the no vote the prime minister instead of doing as he promised to work with Scotland instead promised to withdraw Scottish MPs voting rights at Westminster on English only matters.  Fair enough you might think but the Scottish budget is defined by these English matters so there are no English only laws.  The promised new powers for Scotland were consulted on and nothing very interesting or useful was promised in the end.

So there’s a feeling of annoyance at the lack of respect for Scots.  With the population suddenly very interested in politics (85% turnout compared to 65% for a UK election) people have noticed.  The membership of the nationalist parties has quadrupled and the current UK election has many people wondering what’s in it for Scotland.

What’s in it for Scotland?

There are 3 major London based parties and they are showing none of the optimism shown by the Yes side in the referendum campaign.  Almost exclusively they talk down Scotland continuing to say it’s too small and too poor to manage its own affairs.  So the opinion polls have shown people prefer an optimistic message as the SNP gives and they have been forecast to go from 6 seats in Scotland to every single of the 59 seats.

With England equally split between the Tory and Labour parties it seems likely the deciding vote for approval of government business will be from the SNP.  The English media have gone a bit nuts at this and started querying if this is legitimate and a valid part of the constitutional setup.  Which makes Scottish voters wonder what happened to all those promises of wanting to work together during the referendum.

My vote is for an MP from Edinburgh.  The current guy is Ian Murray from Labout.  He didn’t bother to turn up to a vote on bombing Iraq.  He accepts donations from the Arab Emirates and PriceWaterhouseCoopers which are straight bribery for his votes, these governments/companies have no interest in Edinburgh’s people. He calls SNP leader Nicola Sturgeon “Miss Sturgeon” despite her being married for years, an example of everyday sexism.

Reviewing the leaflets and watching the video interviews none of the candidates stand out as great parliamentarians so I’ve voted mostly on party and go with the SNP.  The candidate is Neil Hay who’s been criticised for having a Twitter account where it posted to a satirical article, a non-issue as far as I can see.  It’ll be interesting to see who chooses to work with them to be a UK government and who continues to claim that Scottish political wishes are irrelevant.

See you on Friday.

We had a voluntary poll here and of course the no voters stayed at home so it was 80% yes.  The Catalan government now says it resign in September and the election resulting will be a referendum on independence.  If more than 50% vote for independence parties they’ll unilaterally declare independence. At which point I expect Spain to send in the troops.

We live in interesting times.