We last heard from Fineholm and Geoffrey Mckay in a grumpy blog post from 2018 when I wrote about the incomplete unauthorised repair their had done to our communal tenement.   In the last 12 months we’ve had the exact same issue with the exact same problems.  I got an e-mail last year saying they were doing repairs and we’d be sent the bill.  No indication of what the repairs were or any attempt to follow the correct process of meeting with neighbours and discussing and having a vote to approve.  I asked for more details and eventually got some description but no indication they had been to look at the property or attempted to meet with anyone else.  When I went to look at the property there were still leaks in the roof and more work needing done.  Fortunately a contractor sent by Fineholm turned up at the same time so we could look together along with another owner and discuss.

I did run a vote of owners along with a full description and photos of the works needed and the works were approved and done once lockdown allowed.  In completing the task that Fineholm and Geoffrey Mckay chose not to do I didn’t hear anything from them.  Once the works were done and we’d had a chance to look and everyone had paid up except this owner I did get an e-mail from Geoffrey saying he hadn’t paid me because not everyone had paid him for his unilateral, incomplete, undocumented, unverified works done earlier.  When I said I’d take him to court in a week he left it another week and paid some of the money I was due but not all.

The culture here is self entitled people running a business who do not understand they are running a business and doing a job.  There is no enforcement and no regulation so they know they can get away with just ignoring their neighbours, not communicating, working illegally, not visiting the property and leaving people annoyed and out of pocket.

The solution is simple enough, if landlords (and I’m one of them now) can’t show they have visited their property and had a look around including attic and roof every six months and discussed it with their neighbours they shouldn’t be allowed on the Scottish Landlord Register and they should be blocked from running a business they are incapable of doing.  This goes for agents too, Fineholm shouldn’t be allowed to agent for rented property if they are not able to visit the property and discuss works.   It probably doesn’t need new legislation, just the council to use the powers they have.

Four years after the referendum and with only five months to go until Brexit takes effect we are finally starting to see what the UK government is proposing that to mean.

“That is why we continue to look for a deal with, at its core, a free trade agreement similar to the one the EU already has with Canada – that is, an agreement based on existing precedents. We remain unclear why this is so difficult for the EU, but we will continue to negotiate with this in mind.”

So gone is the talk of a custom “red white and blue” Brexit and in is the talk of copying CETA.  This means vast new bureaucracy and taking away our freedoms, something the UK gov is openly paying money and boasting about.

CETA is the EU and Canada trade deal.  It has quotss on how much goods can be traded, tariffs on many of the goods and does sod all for services.  It’s more generous than basic WTO rules but it’s no single market.  It’s not what the political declaration says which as agreed by the UK gov along with the transition withdrawal agreement last year.

Our media (either from London or Scotland) doesn’t usually cover the EU side when politicians put out statements, but the EU one is here and of course it lists the problems which the UK one dismisses.

On two important subjects, transport and energy, we had intense and useful discussions. However, the UK continued to request single market-like benefits.

In addition, there is still no progress on two essential topics of our economic partnership.

None of this was ever mentioned during the EU referendum by the leave campaigns who just lied when is was suggested there would be massive bureaucratic lorry parks costing billions.

The only change is that the UK gov says they won’t impose any import taxes for the first six months.  This going against WTO agreements but they are slow to pick up so will allowed to be waved for six months.  Presumably the EU will impose taxes on imports of course, putting UK business at a massive disadvantage.  But at least we shouldn’t be short of food or medicine or other stuff we need to import for six months, it’ll just cost more.

Join Yes for EU to help the campaign to support an independent Scotland rejoining the EU to be a normal international country without bureaucracy.

The Ubuntu Podcast did a review in their new edition of the KDE’s Applications site.  Listen from 14 minutes in.  You can hear such quotes as

They did suggest adding a featured app, which is a task we also want to do for Discover which has featured apps but they don’t currently change. That feels like an interesting wee task for anyone who wants to help out KDE.

But more easy would be the task of going over all the apps and checking the info on them is up to date, including going over the various app stores we publish on like the Microsoft Store and making sure those links are in the Appstream meta-data files.

Finally, the main task of All About the Apps is getting the apps onto the stores so we need people who can get the apps running on Windows etc and put them on the relevant Stores.  I did an interview asking for this for Flathub in the most recent monthly apps update.

We’re here to help on our Matrix room and my contact is always open.

KDE is All About the Apps as I hope everyone knows, we have top quality apps that we are pushing out to all channels to spread freedom and goodness.

As part of promoting our apps we updated the kde.org/applications pages so folks can find out what we make.  Today we’ve added some important new features: 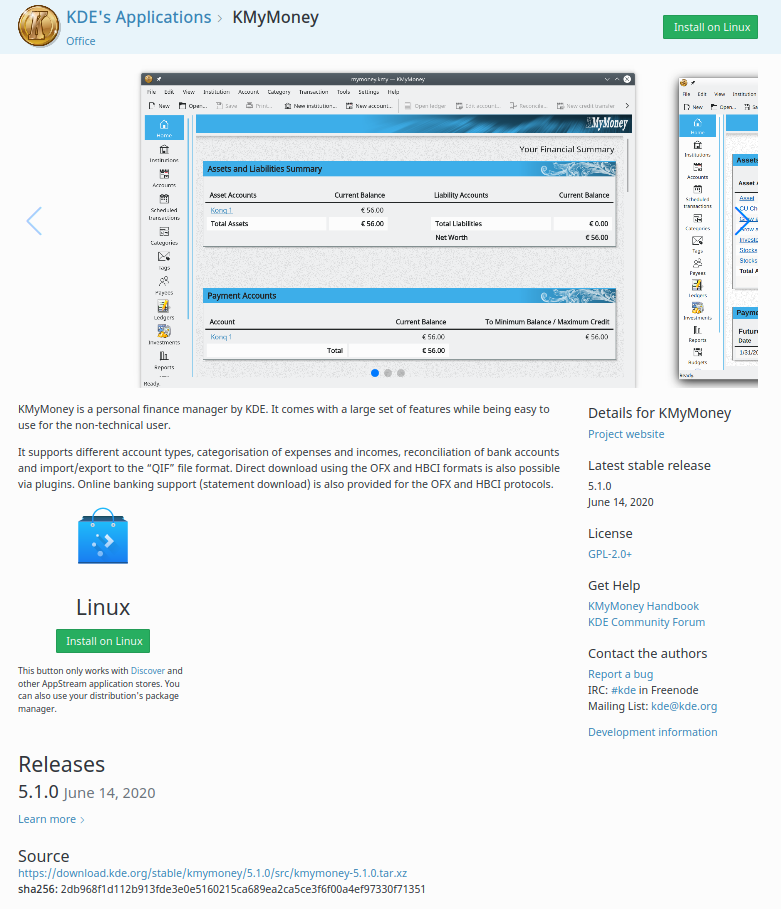 Here on the KMyMoney page you can see the lovely new release that they made recently along with the source download link.

The “Install on Linux” link has been there for a while and uses the Appstream ID to open Discover which will offer you the install based on any installation source known to Discover: Packagekit, Snap or Flatpak. 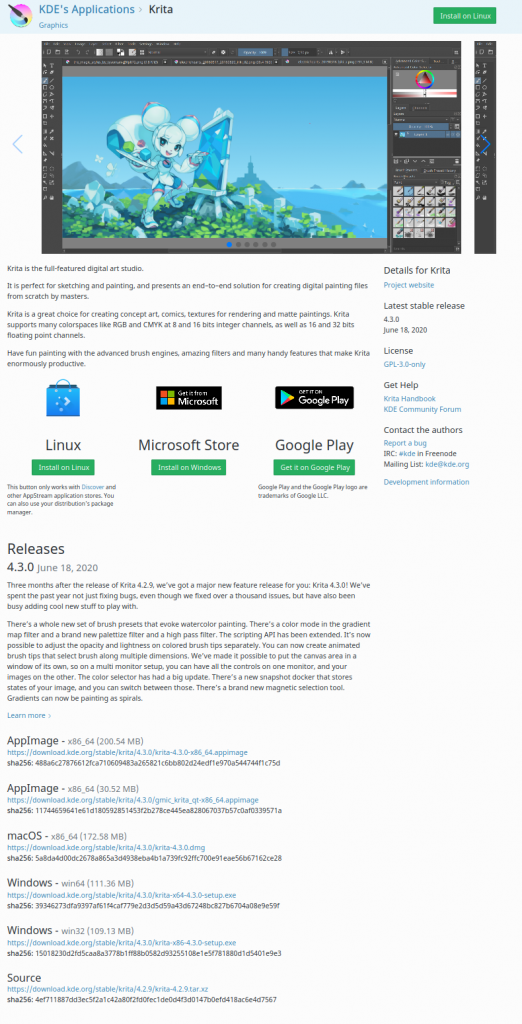 Here in the Krita page you can see it now offers downloads from the Microsoft Store and from Google Play.

Or if you prefer a direct download it links to AppImages, macOS and Windows installs. 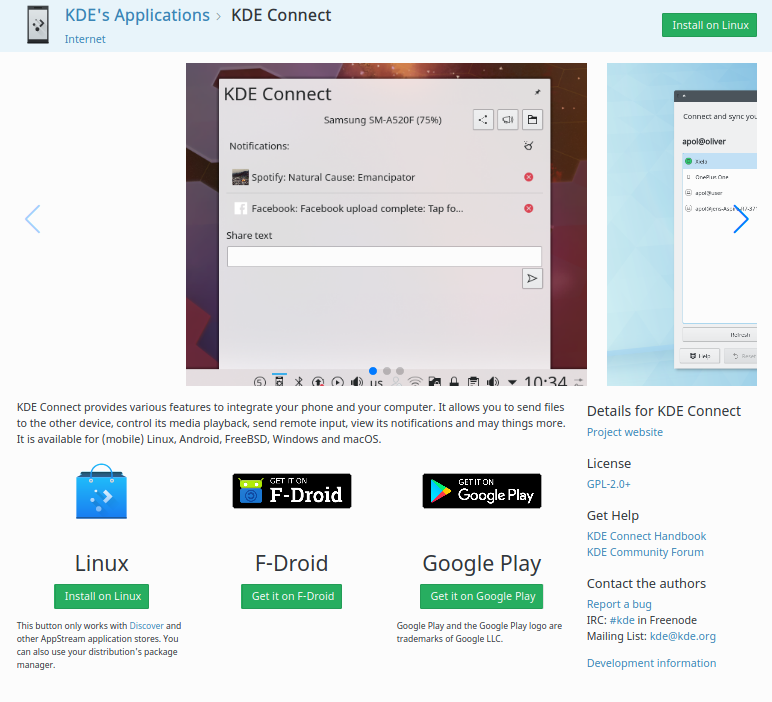 And here’s the KDE connect page where you can see they are true Freedom Lovers and have it on the F-Droid store.

All of this needs some attention from people who do the releases.  The KDE Appstream Guidelines has the info on how to add this metadata.  Remember it needs added to master branch as that is what the website scans.

There is some tooling to help, the appstream-metainfo-release-update script and recently versions of appstreamcli.

Help needed! If you spot out of date info on the site do let me or another Web team spod know.  Future work includes getting more apps on more stores and also making the release service scripts do more automated additions of this metadata.  And some sort of system that scans the download site or maybe uses debian watch files to check for the latest release and notify someone if it’s not in the Appstream file would be super.

Thanks to Carl for much of the work on the website, formidable!