Three years after doing my FSRT instructor training it’s time for a refresh which for some reason is called a ‘moderation’.  Dave Rossetter and Lyle Smith took 11 of us on a sunny day to swim in Loch Morlich.  Here’s some notes for my own interest and anyone else who cares:

For moving use the principles of slide, push and keeping hands flat. (Not pulling and grabbing.)  Near hand pushes away, far hand pulls closer.

Throwline training doesn’t need to be too in depth, it’s foundation stuff for sheltered water here.  Rope width and hand grip etc not too important and often then can just stand on the rope and tell the swimmer to pull themselves in.

You don’t need to fully empty a boat, worth emphasising that, in sheltered water you can always paddle to the side to empty. Water level below seat level is good enough.

You can do a narration throughout the rescue which keeps you focused and reassures the swimmer.

As an exercise get them to turn over the boat several times with only flat hands (for long boats do this at the end as well as the middle).  Another exercise is to practice moving your boat around a capsized boat.

For towing the scenario was given of a weak paddler who can’t control their steering well, we followed them closely doing a nudge on their boat at the tail or at the front in a v form.

Self rescue is important, you’ll end up with a boat full of water but that’s fine in sheltered water.  It’s fine to turn round and seat yourself into an upturned canadian canoe.  Also a nifty flip round with a SUP board.  When doing a self rescue (or peer rescue) stay long and flat, floating your feet up to the surface.

SUPs were added compared to 3 years ago because they are popular.  They seem easy enough to do self and peer rescue on but some less able people won’t manage and we were shown a technique for unconcious paddler where you hold onto their hands and an up-turned board and step onto their board to pull them round.

For deep water rescues a rope has been added, either the pinter of a canadian through a thwart and over the swimmer’s boat or a sling & carrabeaner from your kayak over their boat, they can pull themselves up on it.

For an unconscious rescue take your far away knee out to help with the rotation.

Dave did the day without any sprey decks or air bags which certainly helps with minimising faff when swapping boats but I’m not convinced it’s useful for kayak rescues. 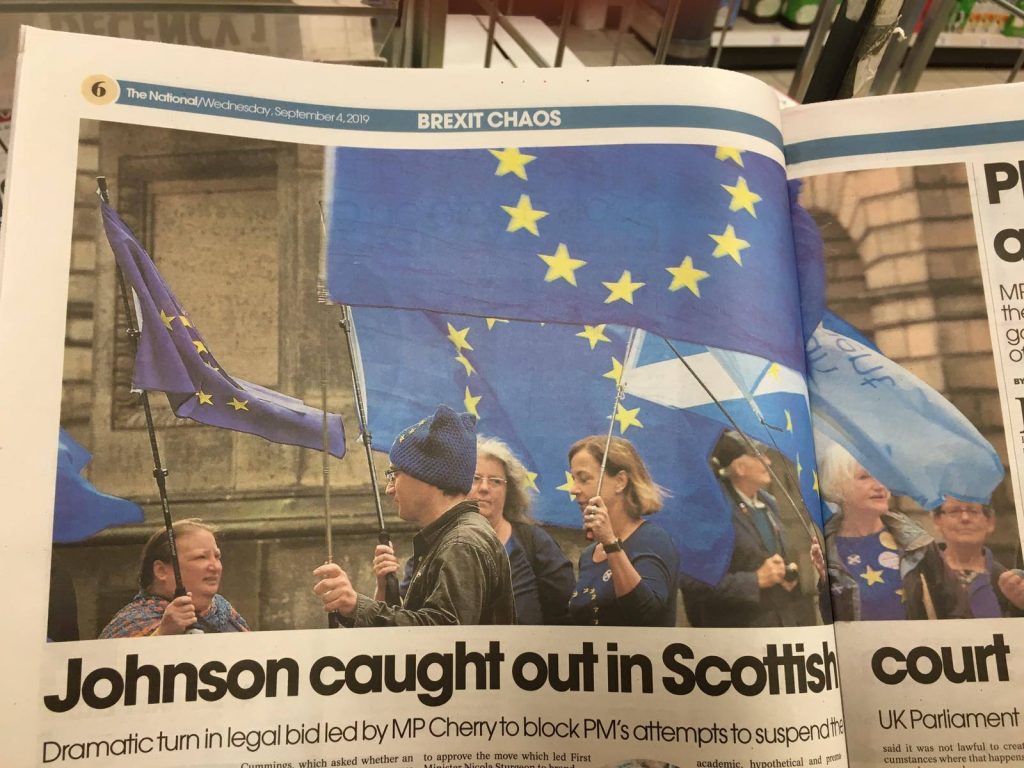 This week I went to Parliament square in Edinburgh where the highest court of the land, the Court of Session sits.  The court room viewing gallery was full,  concerned citizens there to watch and journalists enjoying the newly allowed ability to post live from the courtroom.  They were waiting for Joanna Cherry, Jo Maugham and the Scottish Government to give legal challenge to the UK Governement not to shut down parliament.  The UK government filed their papers late and didn’t bother completing them missing out the important signed statement from the Prime Minister saying why he had ordered parliament to be shut.  A UK government who claims to care about Scotland but ignores its people, government and courts is not one who can argue it it working for democracy or the union it wants to keep.

Outside I spoke to the assembled vigil gathering there to support, under the statue of Charles II, I said how democracy can’t be shut down but it does need the people to pay constant attention and play their part.

Charles II was King of Scots who led Scots armies that were defeated twice by the English Commonwealth army busy invading neighbouring countries claiming London and it’s English parliament gave them power over us all.  So I went to London to check it out. 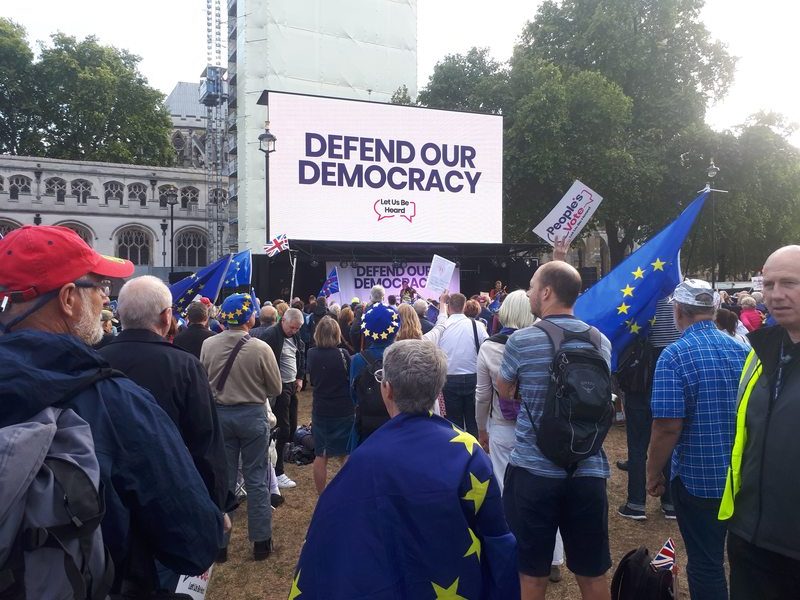 In London that parliament is falling down.  Scaffold covers it in an attempt to patch it up.  The protesters outside held a rally where politicians from the debates inside wandered out to give updates as they frantically tried to stop an unelected Prime Minister to take away our freedoms and citizenship.  Comedian Mitch Benn compared it, leading the rally saying he wanted everyone to show their English  flags with pride, the People’s Vote campaign trying to reclaim them from the racists, it worked with the crowd and shows how our politics is changing. 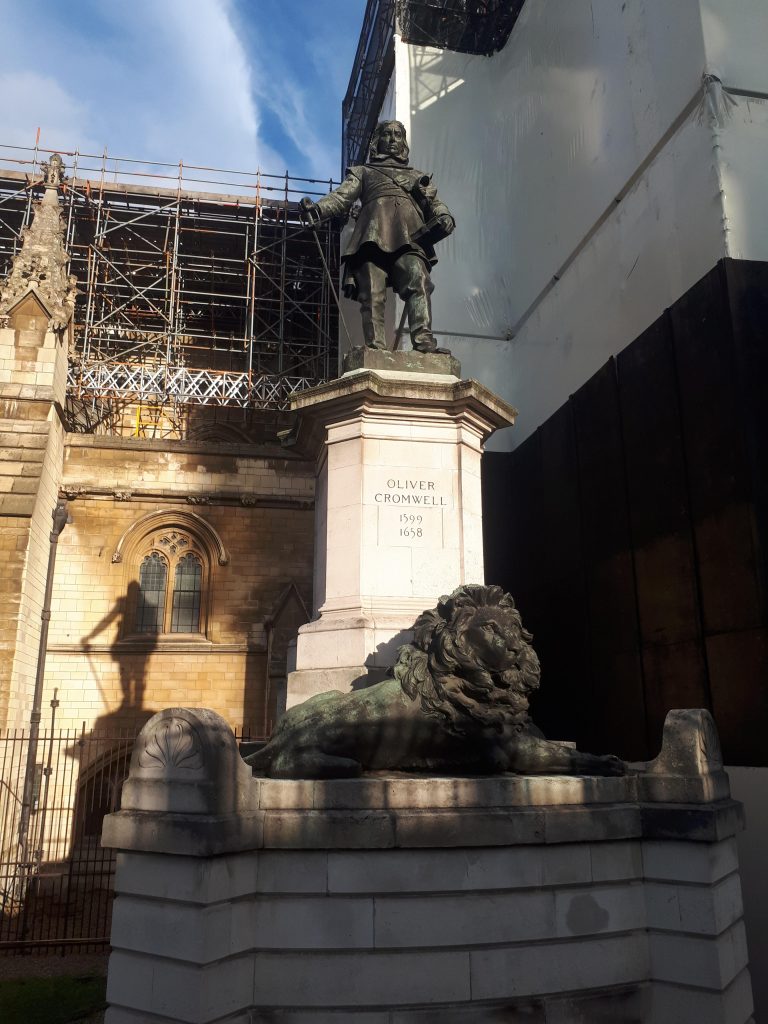 Inside the Westminster Parliament compound, past the armed guards and threatening signs of criminal repercussions the statue of Cromwell stands proud, he invaded Scotland and murdered many Irish, a curious character to celebrate. 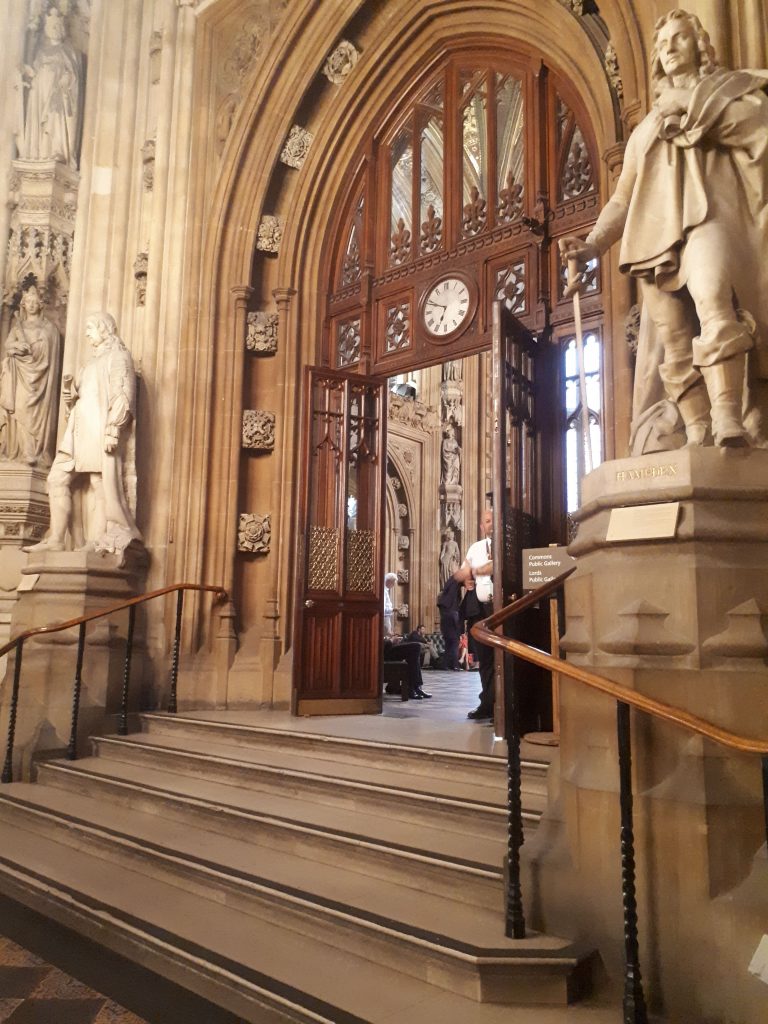 The compound is a bubble, the noise of the protesters outside wanting to keep freedoms drowned out as we watched a government lose its majority and the confidence on their faces familiar from years of self entitlement vanish. 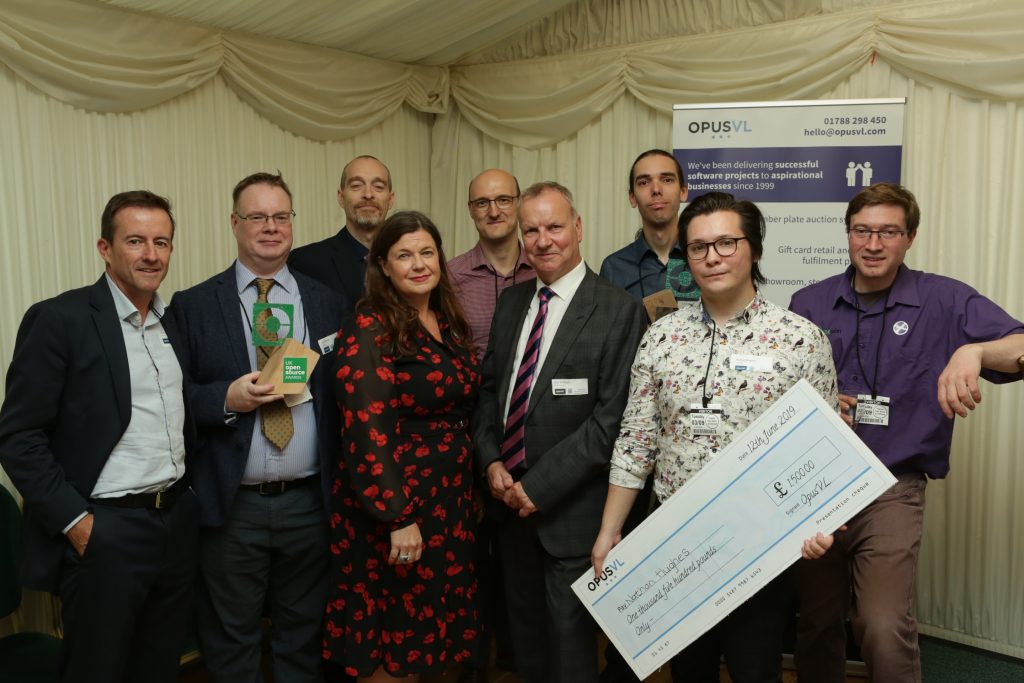 Pete Wishart, centre front, is an SNP MP who runs the All Party Intellectual Property group, he invited us in for the launch of OpenUK a new industry body for companies who want to engage with governement for open source solutions.  Too often governement puts out tenders for jobs and won’t talk to providers of open source solutions because we’re too small and the names are obscure.  Too often when governements do implement open source and free software setups they get shut down because someone with more money comes along and offers their setup and some jobs.  I’ve seen that in Nigeria, I’ve seen it happen in Scotland, I’ve seen it happen in Germany.  The power and financial structures that proprietary software create allows for the corruption of best solutions to a problem.

The Scottish independence supporter Pete spoke of the need for Britain to have the best Intellectual Property rules in the world, to a group who want to change how intellectual property influences us, while democracy falls down around us. 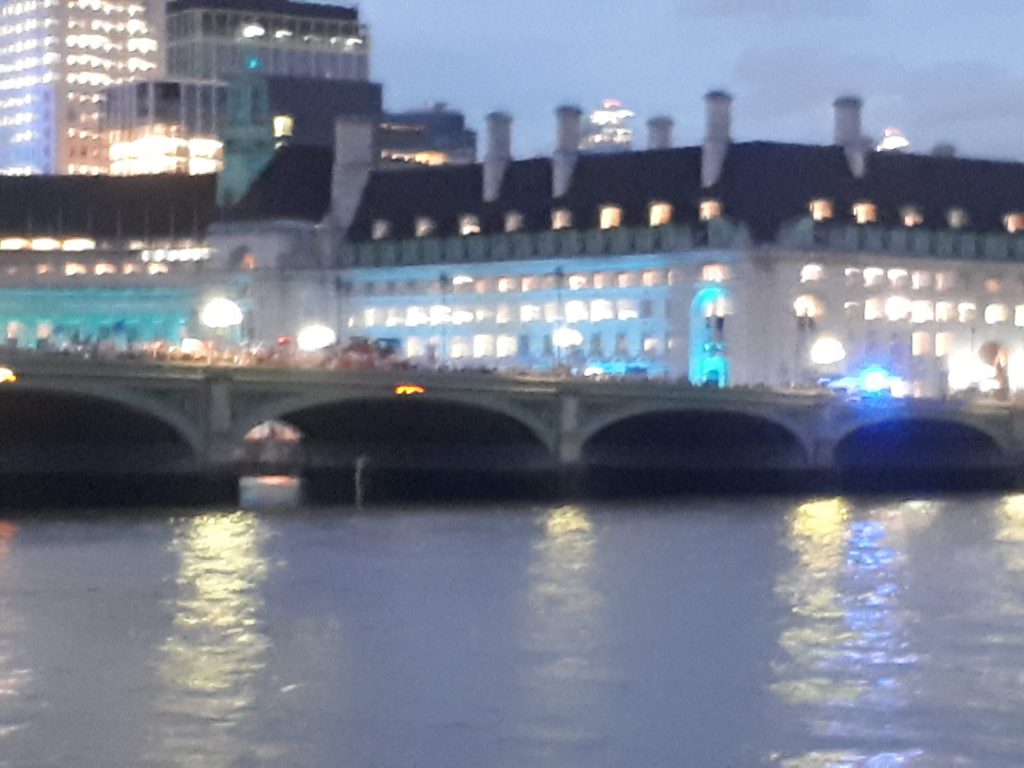 The protesters marched over the river closing down central London in the name of freedom but in the bubble of Westminster we sit sipping wine looking on.

The winners of the UK Open Source Awards were celebrated and photos taken, (previously) unsung heros working to keep the free operating system running, opening up how plant phenomics work, improving healthcare in ways that can not be done when closed.

Getting governement engagement with free software is crucial to improving how our society works but the politicians are far too easily swayed by big branding and names budgets rather than making sure barriers are reduced to be invisible. 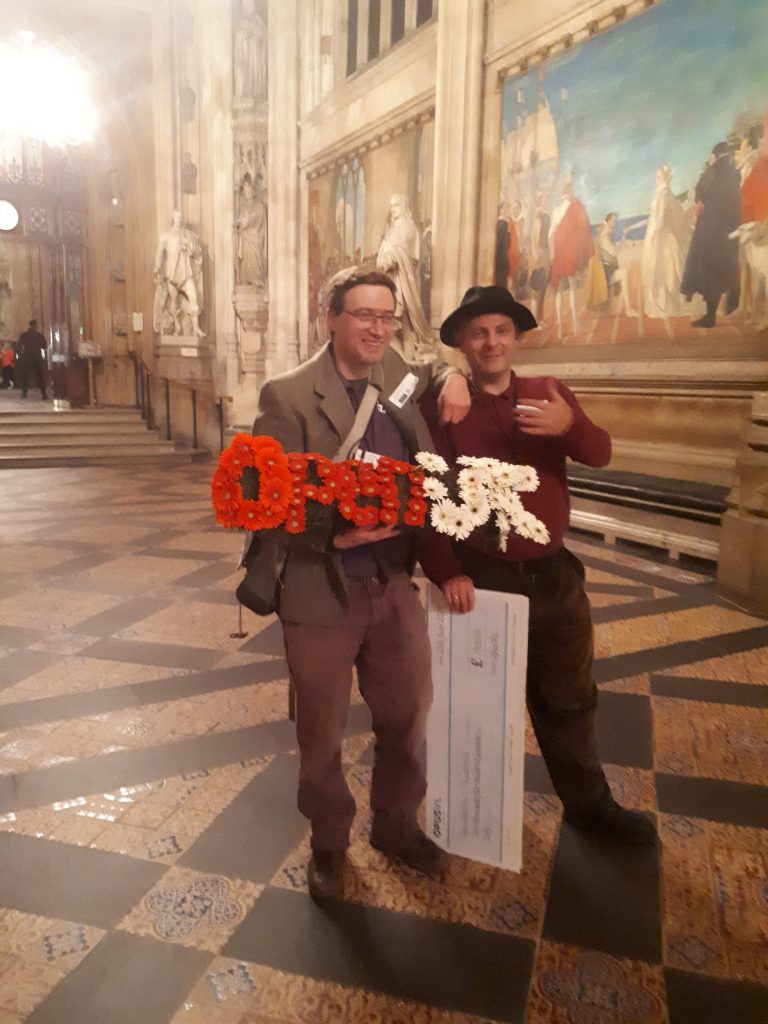 The crumbling of one democracy alongside a celebration and opening of a project to bring business to those who still have little interest in it.  How to get government to prefer openness over barriers?  This place will need to be rebuilt before that can happen.

Onwards to Milan for KDE Akademy.

The electoral commission is wrong.  Leave vs Remain is not a fair question without bias, it is an unanswered unspecified position.  This is what has led us into the position we are in now where the UK voted (through a restricted franchise with lies and cheating and criminal behaviour) to change the status quo but with no indication of what to change it to.  This is what the electoral commission should worry about, what do you want rather than what don’t you want.

A more fair question would have been “Do you want to Remain, Join EFTA, Be like Turkey, No deal”.

I can’t actually think of a better question for a Scottish independence question.  The proposal for how to do it was published in a long book by the Scottish Government and it is summarised by being an independent country.   Questions such as “Do you want to leave the UK” are invalid because the UK isn’t a membership organisation and because it could mean any other situation instead such as uniting with Norway or having separate city states or whatever.