Jings no wonder people find computer programming scary when the most easily accessible lanugage, JavaScript, is also the most messy one.

Occationally people would mention to me that the categories on Planet KDE didn’t work and eventually I looked into it and it mostly worked but also sometimes maybe it didn’t.  Turns out we were checking for no cookies being set and if not we’d set some defaults for the categories.  But sometimes the CDN would set a cookie first and ours would not get set at all. This was hard to recreate as it didn’t happen when working locally of course.  And then our JavaScript had at least three different ways to run the initial-setup code but there’s no easy way to just read a cookie, madness I tell you.  Anyway it should be fixed now and set categories by default but only if it hasn’t set some before so you may still have to manually choose which you read.

In the Configure Feed menu at the top you can select to read blogs in different languages.  By default it shows only blogs in English, as well as Dot News, Project News and any User blogs who have asked to be added (only two are listed in our config).  You can also show blogs in Chinese (also only 2 listed), Italian (none listed), Polish (one), Portugese (two), Spanish (four but kdeblog by Jose is especially prolific) or French (none).  Work to be done includes working out how to make this apply to the RSS feed. 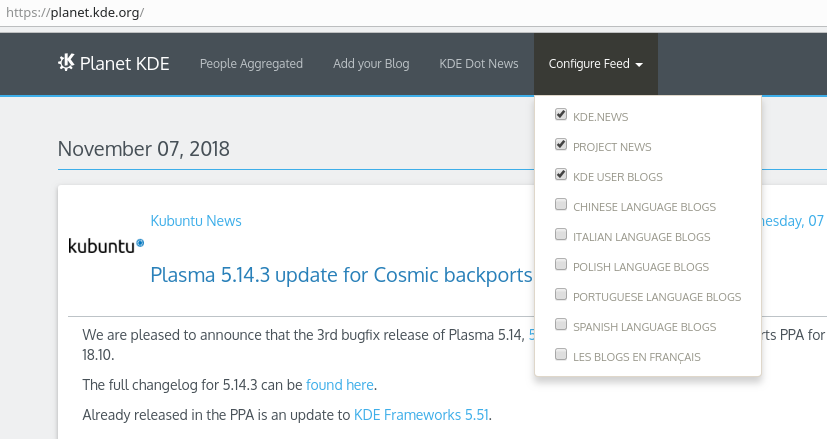 Some years ago I added an embedded Twitter feed to the side of Planet KDE.  This replaced the earlier feed manually curated feeds from identi.ca and twitter which people added but had since died out (in the case of identi.ca) and been blocked (in the case of Twitter).  That embedded Twitter feed used the #KDE tag and while there was the odd off topic or abusive post for the most part it was an interesting way to browse what the people of the internet were saying about us.  However Twitter shut that off a few months ago which you could well argue is what happens with closed proprietary services.

We do now have a Mastodon account but my limited knowledge and web searching on the subject doesn’t give a way to embed a hashtag feed and the critical mass doesn’t seem to be there yet, and maybe it never will due to the federated-with-permissions model just creating more silos.

So now I’ve added a manually curated Twitter feed back to Planet KDE with KDE people and projects.  This may not give us an insight into what the wider internet community is thinking but it might be an easy way to engage more about KDE people and projects as a community.  Or it might not, I haven’t decided yet and I’m happy to take feedback on whether it should stay.

In the mean time ping me to be added to the list or subscribe a bug on bugs.kde.org to request you or someone you know or or your project be added (or removed).  Also volunteers wanted to help curate the feed, ping me to help out.

By a strange coincidence the news broke this morning that RHEL is deprecating KDE. The real surprise here is that RHEL supported KDE all.  Back in the 90s they were entirely against KDE and put lots of effort into our friendly rivals Gnome.  It made some sense since at the time Qt was under a not-quite-free licence and there’s no reason why a company would want to support another company’s lock in as well as shipping incompatible licences.  By the time Qt become fully free they were firmly behind Gnome.  Meanwhile Rex and a team of hard working volunteers packaged it anyway and gained many users.  When Red Hat was turned into the all open Fedora and the closed RHEL, Fedora was able to embrace KDE as it should but at some point the Fedora Next initiative again put KDE software in second place. Meanwhile RHEL did use Plasma 4 and hired a number of developers to help us in our time of need which was fabulous but all except one have left some time ago and nobody expected it to continue for long.

So the deprecation is not really new or news and being picked up by the news is poor timing for Red Hat, it’s unclear if they want some distraction from the IBM news or just The Register playing around.  The community has always been much better at supporting out software for their users, maybe now the community run EPEL archive can include modern Plasma 5 instead of being stuck on the much poorer previous release.

Plasma 5 is now lightweight and feature full.  We get new users and people rediscovering us every day who report it as the most usable and pleasant way to run their day.  From my recent trip in Barcelona I can see how a range of different users from university to schools to government consider Plasma 5 the best way to support a large user base.  We now ship on high end devices such as the KDE Slimbook down to the low spec value device of Pinebook.  Our software leads the field in many areas such as video editor Kdenlive, or painting app Krita or educational suite GCompris.  Our range of projects is wider than ever before with textbook project WikiToLearn allowing new ways to learn and we ship our own software through KDE Windows, Flatpak builds and KDE neon with Debs, Snaps and Docker images.

It is a pity that RHEL users won’t be there to enjoy it by default. But, then again, they never really were. KDE is collaborative, open, privacy aware and with a vast scope of interesting projects after 22 years we continue to push the boundaries of what is possible and fun.