But wait.. that’s not all.. the package manager Muon seem to have a new maintainer so to celebrate we added builds in User Edition and Git Unstable Developer Edition.

Plasma 5.7.4 has been out for some time now so it’s well past time to get it into Neon, delayed by a move in infrastructure which caused the entire repository to rebuild.  All Plasma packages should be updated now in KDE neon User Edition.

Want to install it? The weekly User Edition ISO has been updated and looks lovely. 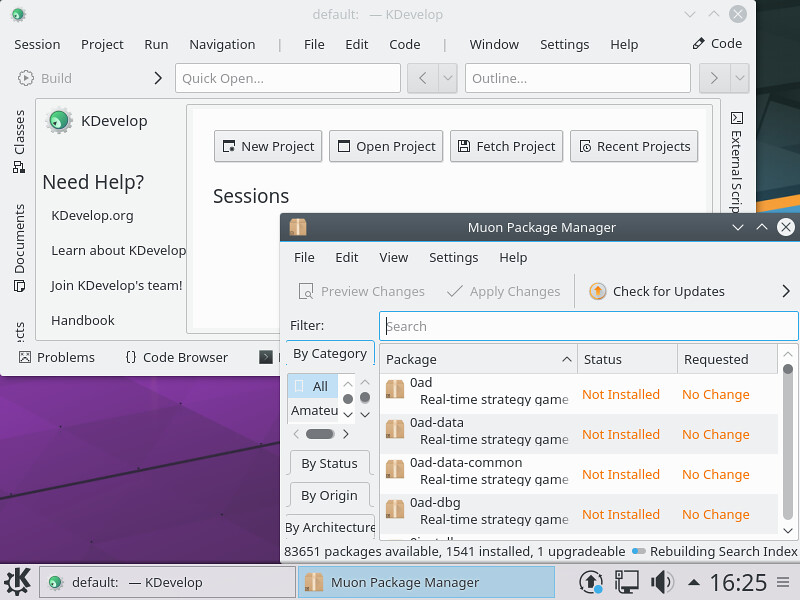 I’ve made some changes to the Plasma 5.8 release schedule.  We had a request from our friends at openSUSE to bring the release sooner by a couple of weeks so they could sneak it into their release and everyone could enjoy the LTS goodness.  As openSUSE are long term supporters and contributors to KDE as well as patrons of KDE the Plasma team chatted and decided to slide the dates around to help out.  Release is now on the first Tuesday in October.

Akademy is this year at QtCon along with FSF-E, Qt, VLC and others.

I booked a flat on AirBNB near to the Akademy location and there’s still a bed or two left available.

If you’d like to star with cool KDE people in a (gentle) party flat send me an e-mail.

Things move fast in the land of Neon light.

Today KDE Frameworks 5.25 was added to Neon User edition.  KDE’s selection of Qt addon libraries gets released every month and this update comes with a bunch of fixes.

Finally Kontact has built in Developer Editions, apologies to those who had a half installed build for a while, you should now be able to install all of KDE PIM and get your e-mail/calendar/notes/feed reader/a load of other bits.  Suggestions now taken for what I should add next to Neon builds.

And in free software you are nobody until somebody bases their project off yours.  Yesterday Maui Linux released its new version based off KDE neon.  Maui was previously the distro used for Hawaii Qt Desktop but now it’s Plasma all the way and comes from the Netrunner team with a bunch of customisations for those who don’t appreciate Neon’s minimalist default install.

A couple for the developers out there, the lovely new slidy and shiny mobile UI framework Kirigami just got released and packages are available in KDE neon.

And Qt’s new web widget QtWebEngine with Chromium goodness now has packages in neon, will we see a KDE web browser appear again? 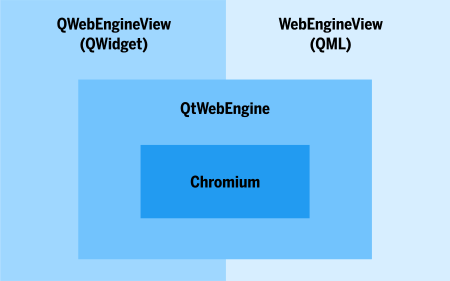 Adding KDE PIM to KDE neon I wondered if it really was as complex to build as it felt.  So I mapped them in Graphviz, and yep, it really is complex to build.  I’m quite amazed at the coders who work on this stuff, it’s an impressive beast.

A few cycles ago the VDG asked for the default Plasma font to be changed from Oxygen, a custom made but poorly maintained font for Plasma, to Noto.  Noto is a Google project which is intended to provide complete Unicode coverage.  It is based off Google’s Droid font for Latin and some other fonts for other scripts.  But it lacked a monospace font which is important to us hackers who likes to use a console and write code in it.

Annoyingly all fonts are poorly organised in interesting and mysterious ways.  In the case of Noto people think there’s a mono font because there does exist Noto Mono CJK but of course that’s only for oriental languages.  But search around a bit more and the Mono font is in the Git repository where it was committed at the start of the year only it’s not available in the download options on the website.  Some distros package it straight from Git because the website download is incomplete but then some don’t.  But trying it out a problem cropped up, there’s no Bold variant of the font which is used for highlighting in Kate and to some extent in consoles.

Looking around Adobe has Source Code Pro, a freely licenced font that contains all the goodness but many distros don’t package it.  The tools used to create it are non-free but for fonts I’ve never seen a package which actually compiles the font from source.  Even if the tools are free they’re as bad with their release management as you can imagine: for years Font Forge’s maintained website wasn’t findable with Google.  When I was doing the build system of Oxygen Font I had an option to use Font Forge but the default was just to copy the TTF files directly.  A TTF file can be opened and edited so it can be considered a “preferred modifiable form” which is what free software distros need to ship it.  Regardless if there’s no packages then it won’t get used so Source Code Pro isn’t an option.

Which is when a nice Debian spod pointed out Hack, an openly developed font using widely supported formats and tools based off Bitstream and DejaVu’s earlier work.  It supports lots of scripts, has bold and Italics and is widely packaged.  So I updated Plasma Integration, the Qt plugin to make Qt stuff look like Plasma stuff, to use Hack.  I also added kconf-update scripts to update old apps to Hack: Plasma’s new monospace font, coming in Plasma 5.8.

How Hack looks in Kate with source code

And for comparison, Oxygen Mono and Noto Mono without bold.