It’s time to vote for the European Parliament elections which happen next Thursday 22nd May 2014. It’s hard to get excited about European elections because the EU parliament is just a revising chamber, so candidates can’t say “we will create a law on X and spend money on Y” they can only say “we will promote cause X and campaign for Y”. But if you don’t vote, you’re a bad citizen and can’t complain about anything. The media coverage is poor, they mostly seem interested in UKIP for reasons I can’t work out. One week before the elections the Scotsman politics page has one story, and guess what it’s about UKIP. The bastin of quality English liberal journalism The Guardian’s European Elections page has not one story about what the parties have in their manifestos. The only place to see the candidates talk is a three minute clip from a BBC debate which isn’t on iPlayer.

The best place to get a view on what interesting votes have happened in the last 5 years in the EU parliament and to see how your MEPs voted is My Vote 2014. 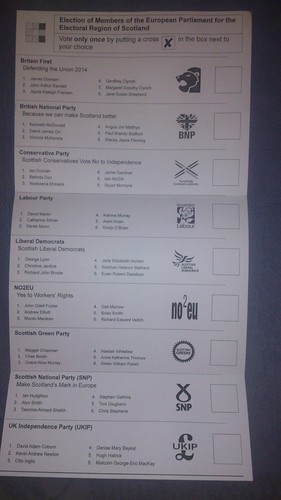 So firstly the nutters: Britain First are a splinter group from the BNP and their top candidate James Dowson is from Northern Ireland, where I’m guessing he’s been busy fighting the police to keep a Union Flag flying rather than care about anything important. The BNP’s Kenneth McDonald is sadly from Edinburgh although the bottom 4 candidates are all from England. I wonder whatever made him a racist twit in a country with minimal race problems. UKIP are not polling great in Scotland fortunately but the opinion polls show a swing to them, probably due to wall to wall TV and newspaper coverage. Their top candidate is a fat man from London. Then there’s the left wing nutters, no2eu. It’s quite nice to see the left wingers get together and the right wingers get splintered, a change from the historical norm.

Then there’s the discredited mainstream London parties. The Conservative and Unionists stole our free school milk and have never been forgiven. They also want a referendum on being in the EU but want to be in the EU, this makes no sense whatsoever. Scottish Labour don’t even have a manifesto on their website and they invade random countries. The Scottish Lib Dems might claim to be the party of “in” but they also don’t have a manifesto on their website, and their main performance in government at UK and Scottish level is to do nothing.

Which leaves the SNP and Greens. I’m a card carrying member of the SNP: in general they’re the party I feel most aligned to and I think everyone should donate to a political party else it’ll be left to corrupting powerful influences to do so. The SNP launched their manifesto yesterday and it’s full of decent stuff if you want to download the PDF.

But the Greens edge them out in my opinion because they care about the election. They have a dedicated campaign website which clearly shows what they’re interersted in. It includes a page on digital rights which none of the other parties care about at all. Green MSP Patrick Harvie even came to talk at a Falkirk Linux User Group meeting, I can’t imagine the SNP candidate coming to a meeting of 20 geeks. They even have a briefing paper on digital rights which talks about the potential of Free and Open Source Software and how it’s a bad thing to do mass surveillance, none of the other parties mention that at all.

We Promise is a nice website where candidates sign a 10 point charter on digital rights. Maggie from Greens and Alyn from SNP have promised, but nobody else.

While the SNP claim the final place is between a third SNP candidate and a UKIP candidate, the polls show it’s as likely to be a fight between Greens and UKIP (or even Labour) so I don’t follow that.

And then there’s the election broadcast, the SNP election broadcast is about the independence referendun and doesn’t mention the EU elections. It’s illegal and shows a disrespect for the voter. While the Scottish Green Party has a genuinely amusing one slagging off UKIP and LibDems.

So Greens it is, good luck you tree hugging hippies.