We made a tech preview release of KDE neon User Edition 10 days ago and I made up a survey to get results for how people’s experiences were.  We got 59 responses, here’s a summary: 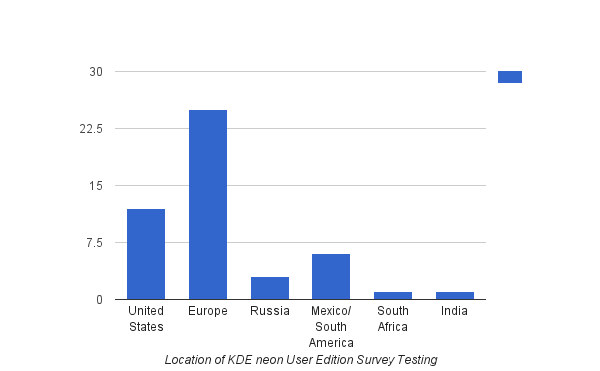 Most people from Europe, a number from the US, the rest spread around the usual parts of the world.

How did you make the installable drive/disk? 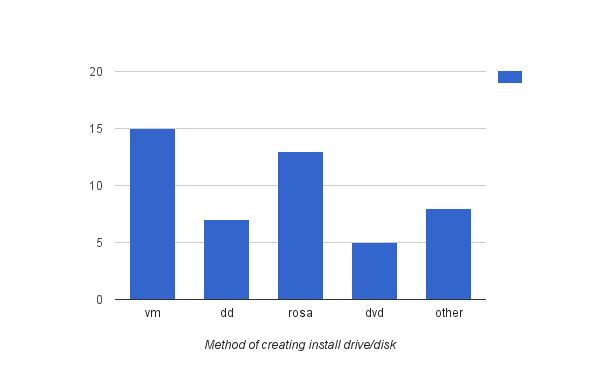 First past the post is people who used a Virtual Machine, sensible enough for a testing release.

Next is ROSA which I discovered recently and seems to work on most OSes.  Then people who use dd and risk wiping out their hard disk with a 1 letter typo.  Surprisingly there are still people who write to a DVD to install, I’ve no idea why.

In the other category is:
rufus (Windows only)
usb-image-creator (Ubuntu only)
suse imagewriter (unmaintained)
gnome multiwriter (Linux only and why would you want to write multiple at once?)
using: sudo cp neon-useredition-20160426-1028-amd64.iso /dev/sdb + sync (err, does this even work?)

Problems which occurred during booting of the live system

no problems for most

several people reported the black bar in the isolinux/syslinux theme.  these themes are spooky voodoo.

people commented on UEFI not being supported, UEFI is even more spooky voodoo and secureboot is evil voodoo.

“The GRUB splash is practically blank. Pressing the arrow keys opened a dropdown list for language selection. Then I pressed the Esc key to get to the GRUB splash. The “Install” option isn’t any different from the “Try without installing” option.”

“Select the language Spanish, and half the options were translated.”

Lots of “none” here too.  Mostly querying the lack of applications, that’s a feature for now, we’ll add apps soon.

“Upon mouse click in kicker panel consistently resulted in black screen with no recovery. Possible issue with Plasma 6 and AMD GPUs.”

“Baloo crashed immediately (notification in system tray), but did not seem to affect system function.”

Problems which occurred running the installer

‘The “Continue” button is available even after all the steps.’

“You do not ship with open-vm-tools-desktop, so my virtual desktop was smaller than the Ubiquity window”

“the installer was unable to install some packages: (although the provided list was blank), so i couldn’t install the system”

“Does not recognize UEFI partitions/System. Only legacy boot possible.”

“1. On the second page of the installer is a non replaced variable: “$(RELEASE)” 2. While installing there is no teaser how awesome kde is :-), just a blank page.”

“Can’t continue installation in second step (prepare) due continue button is non-functional. Improvement: Install-Program should be in favorites”

There’s bugs in here that come from Ubuntu and bugs that come from not having various bits installed.  I don’t think there’s much point spending much time on this as I expect to change to Calamares soon.

Problems which occurred on the installed system:

Quite a few without problems

Lots complain about missing icons, this is a cache issue “On the kicker menu, there were no icons, but they appeared after a re-boot.” we’ve fixed this, I hope.

“Can not start system, just weird colors after install. ”

“After install of guest additions on VirtualBox desktop panel would load but then disappear.”

“Wanted to install it on dualboot with win 10. Grub does not appear so I cannot boot kde neon which I prefere as primary OS.”

“got a grub shell after install”

“Text garbage on the light blue loading screen after the GRUB menu.”

“Unable to use software-properties-kde : Error: could not find a distribution template for neon/xenial” (known bug this one)

“System boots to console login prompt. X can be started after login. ”

“There was a problem installing kde-l10n because of conflict with plasma-desktop-data”
Problems which occurred when updating the system to latest packages:

No problems for most people but some issues:

Thanks a lot to everyone who tested and gave feedback.  That gives me a good idea of the priority areas to work on.  Keep on testing and reporting bugs and of course any help welcome 🙂