KDE is getting good at writing statements on visions  and missions and values which define who we are. But less sexy and more technical is our various policies some of which are getting out of date.  Pleasingly at Akademy we’ve been able to update two of these policies to comply with current practices and define our activities better.

Application Lifecycle policy defines how projects get into KDE and how they die.  The new version adds in Incubator our method of bringing projects into KDE from elsewhere. It also says what is allowed to be done with Playground projects, you can make an alpha release but if you want to make a beta or final release it should go through kdereview.

Projects must live in kdereview for two weeks and there’s a link to a sanity checklist for things which are often checked in new apps.  There’s a new timelimit of two months to stop stuff living in kdereview forever.

Then your project can become a live project and the policy lists the options it can go into: Applications, Frameworks, Plasma or Self Released.  Self Released used to be called extragear but now it’s just stuff that isn’t somewhere else. 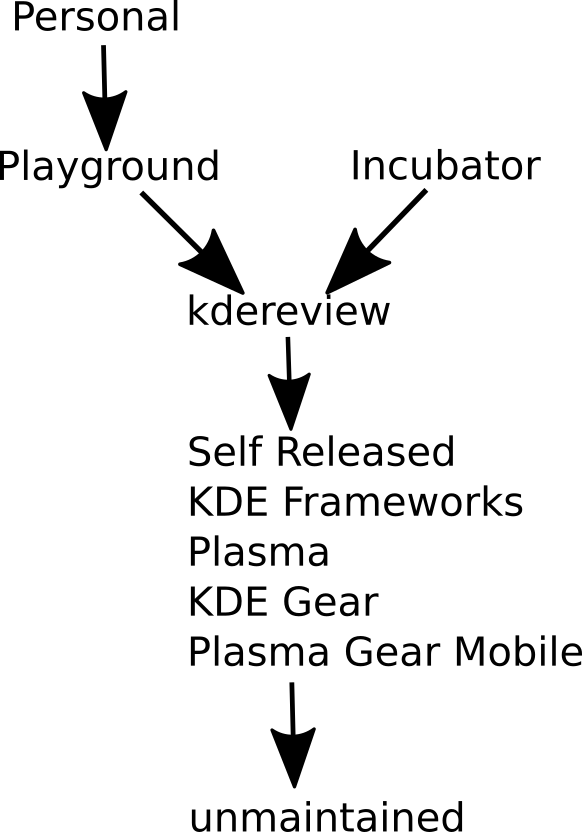 Even more exciting is the updated Licensing Policy.  The big changes here are moving docs and wikis to CC-BY-SA 4.0 which is better recognised and more interchangeable than GNU FDL. We also now allow Affero GPL for server software and infact recommend it. It updates some versions of bits such as noting that Qt is now GPL 3 in places and uses a better variant of MIT.  It also requires use of GPL 2+3 or later approved by KDE e.V. unless there’s some reason not to which simplifies a choice away.

Thanks to Matija and others who have helped out on this.